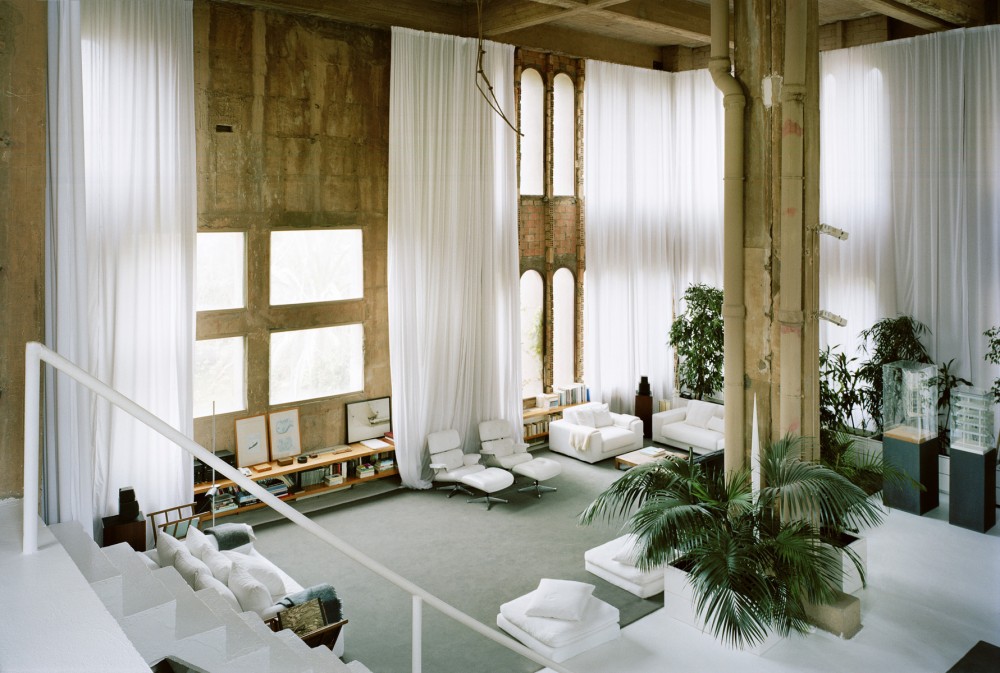 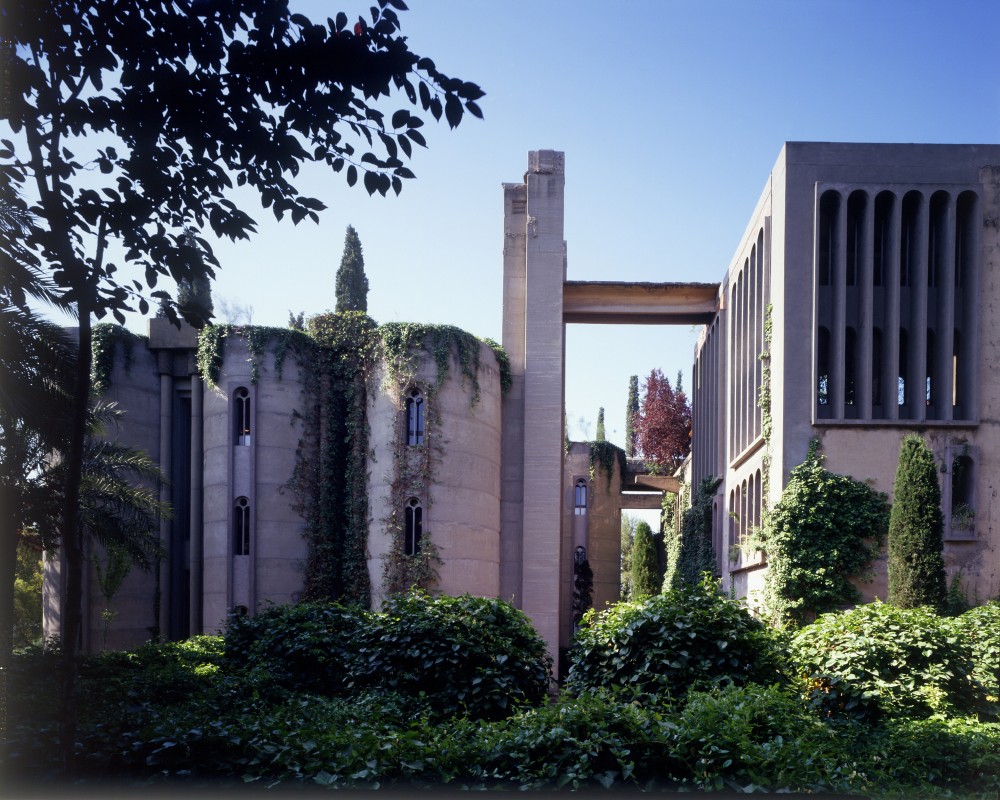 [All images care of Ricardo Bofill, via Arch Daily and Twisted Sifter]

These photos have been open in my browser for over a week now, lurking alongside my active tabs, on standby for a short notice pick-me-up. I’ll take a peek here and there — drooling over the vast vaulted ceilings and clean color palette, the lush jungle of overgrown ivy and floods of natural light — and imagine creating a living space a tenth as bold and luxurious as this.

The amazing story: the complex was originally a cement factory built in the early 1900’s, subsequently abandoned and left to ruin, and then discovered by Spanish architect Ricardo Bofill in 1973. Located on the outskirts of Barcelona in Sant Just Desvern, the factory included over thirty silos and massive machinery rooms both above and below ground. Amid the crumbling walls and mangled iron struts and silent industrial mixers, Bofill saw the skeleton of a stunning architecture office and went to work. 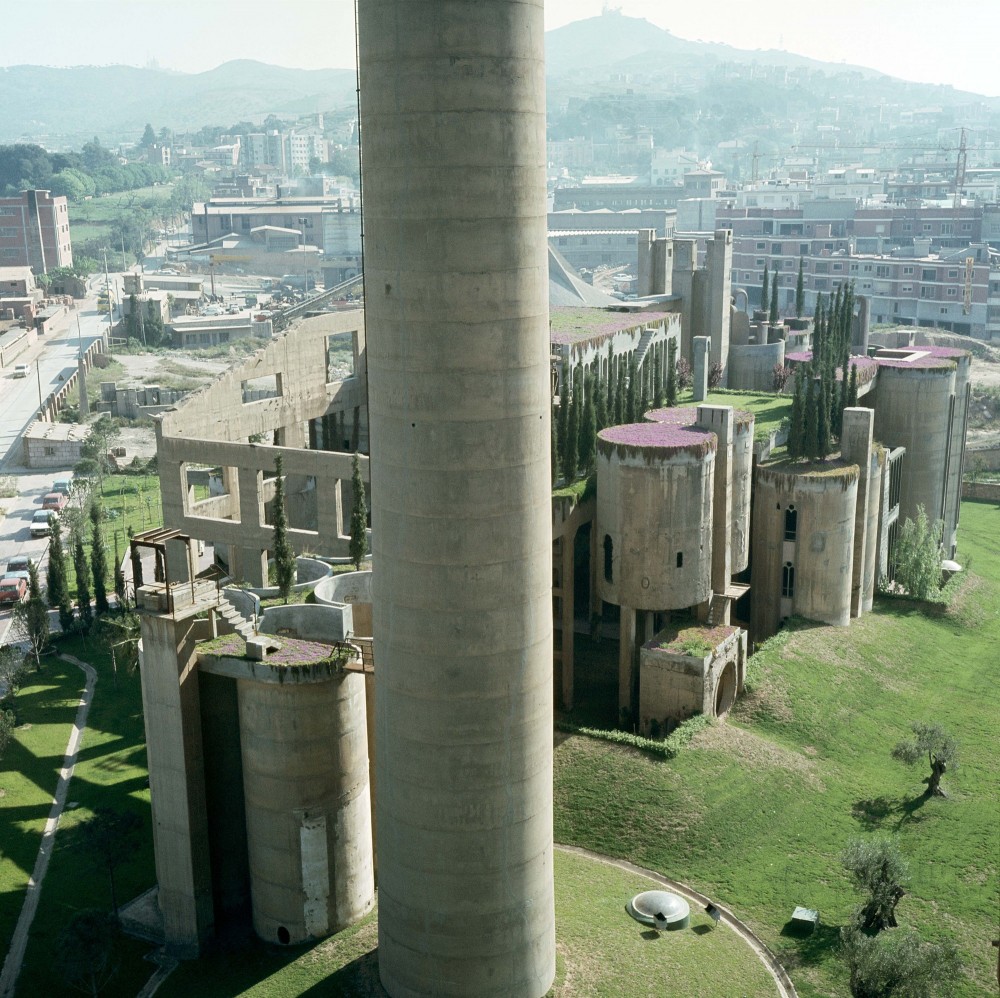 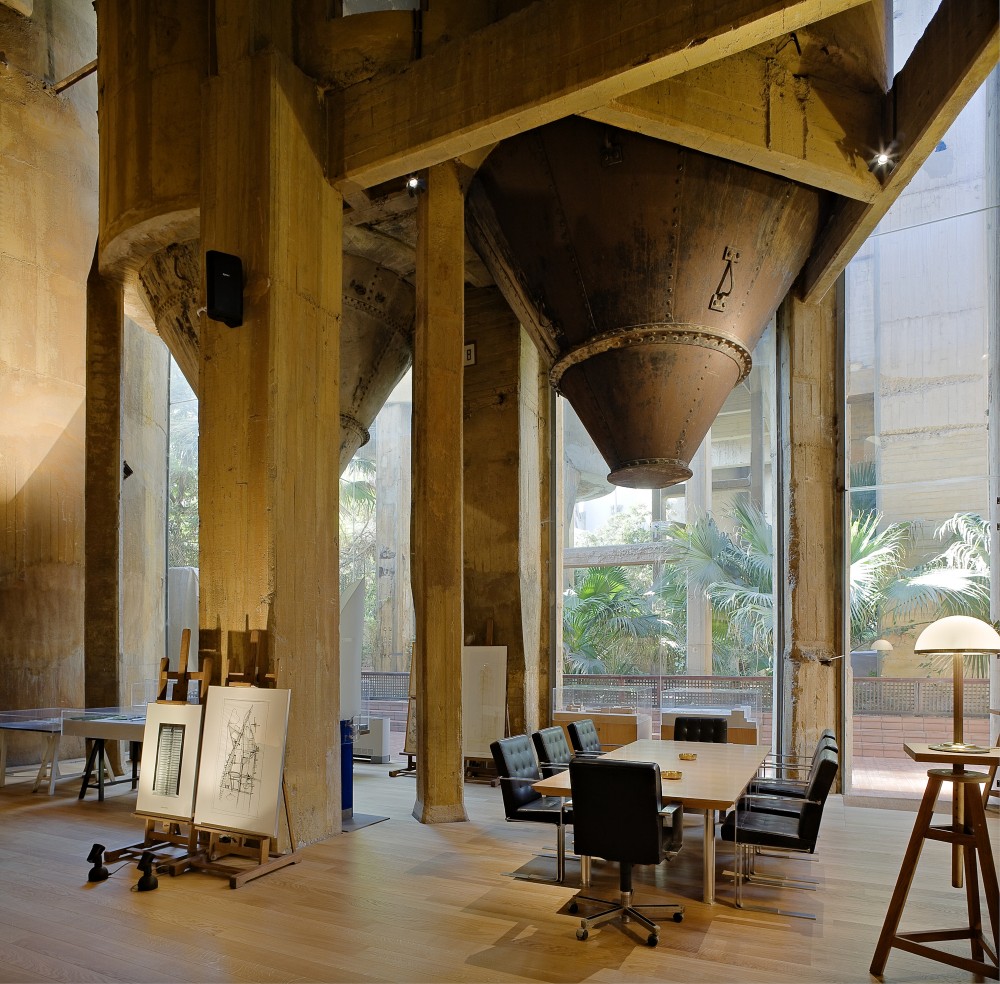 In two years of demolition and reconstruction, the structure was pared down to eight silos containing offices, a library, a modeling room, a gallery space called “The Cathedral” — used for concerts, exhibitions, lectures, and other events — and Bofill’s own house and guest rooms: the Taller de Arquitectura was born. 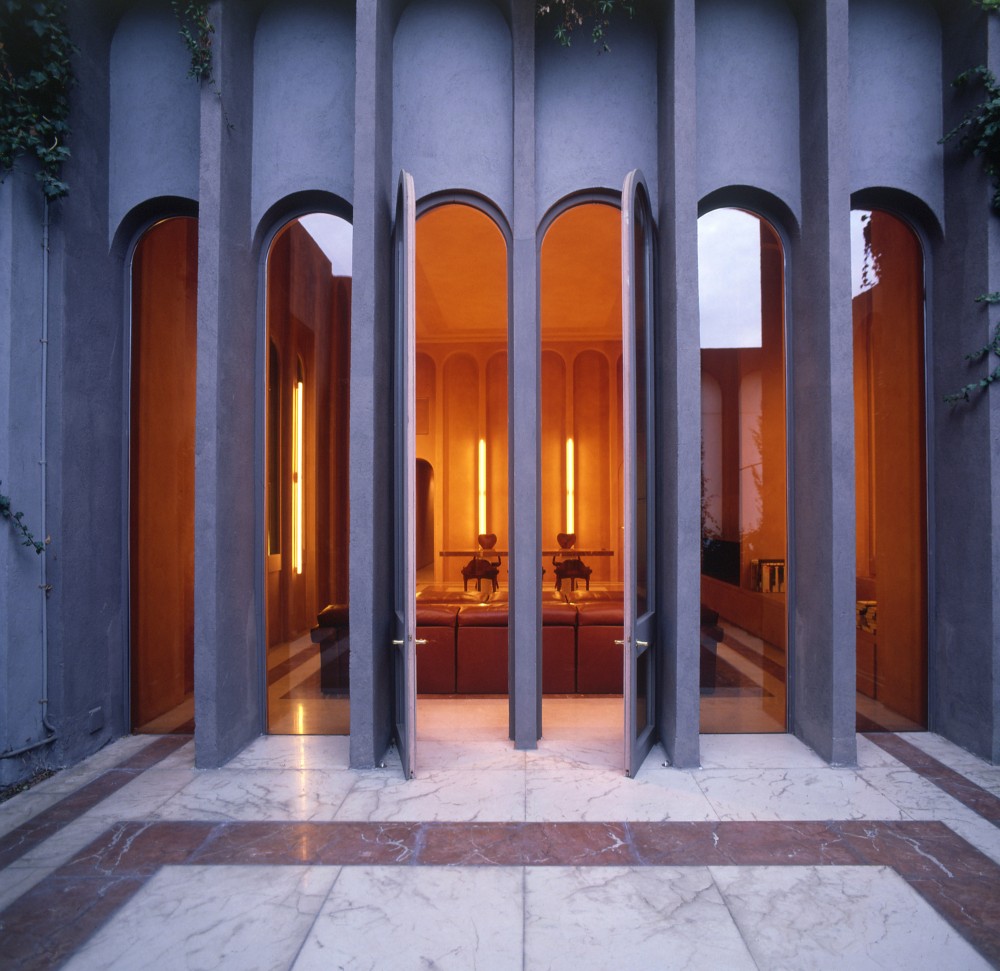 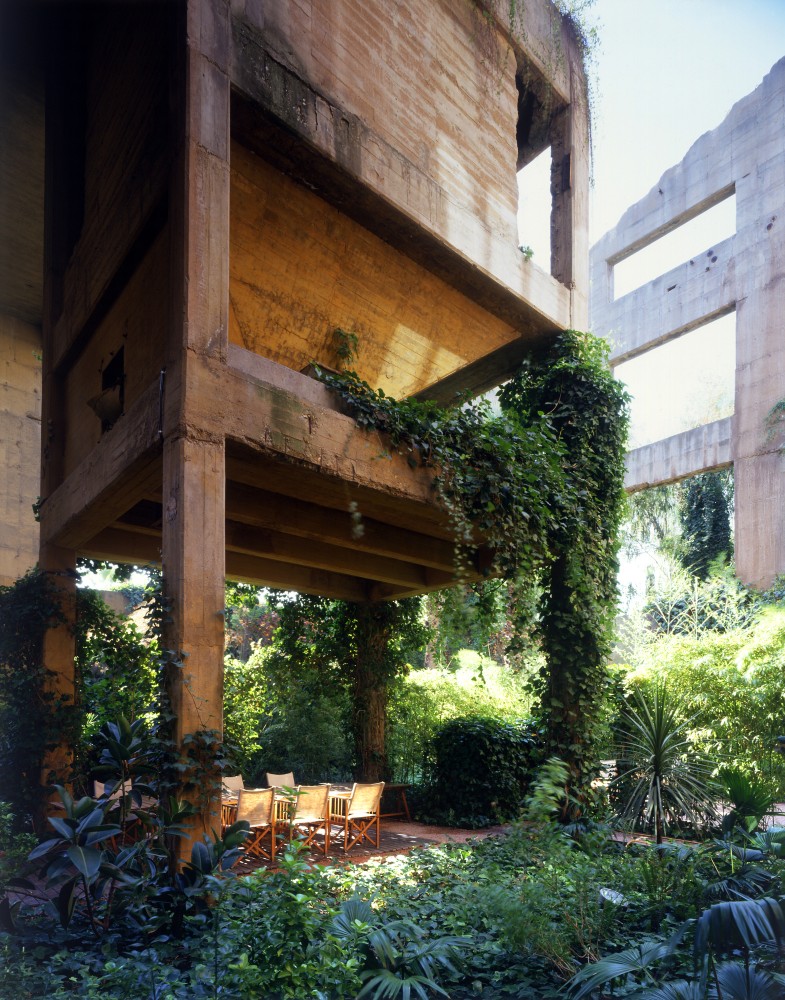 I’m a total sucker for industrial materials and strict geometric lines, not to mention unexpectedly repurposed spaces, and this smooshes all of those into one stunning whole. I love the staircases marching towards the sky, the sweeping floor-to-ceiling curtains, the rough walls and nicked corners . . . It’s absolutely incredible to me that any one person can conceptualize structures like this studio in their entirety — from the scale of a stadium down to the arc of light from a window, the vision required is monumental. And in this case, it must have been more difficult in some ways to excavate the beauty within an existing structure than to pluck a castle fresh out of thin air. Forget Gaudí’s whimsies and Catalan Modernista, this gem is sitting pretty at the top of my next Barcelona trip list. 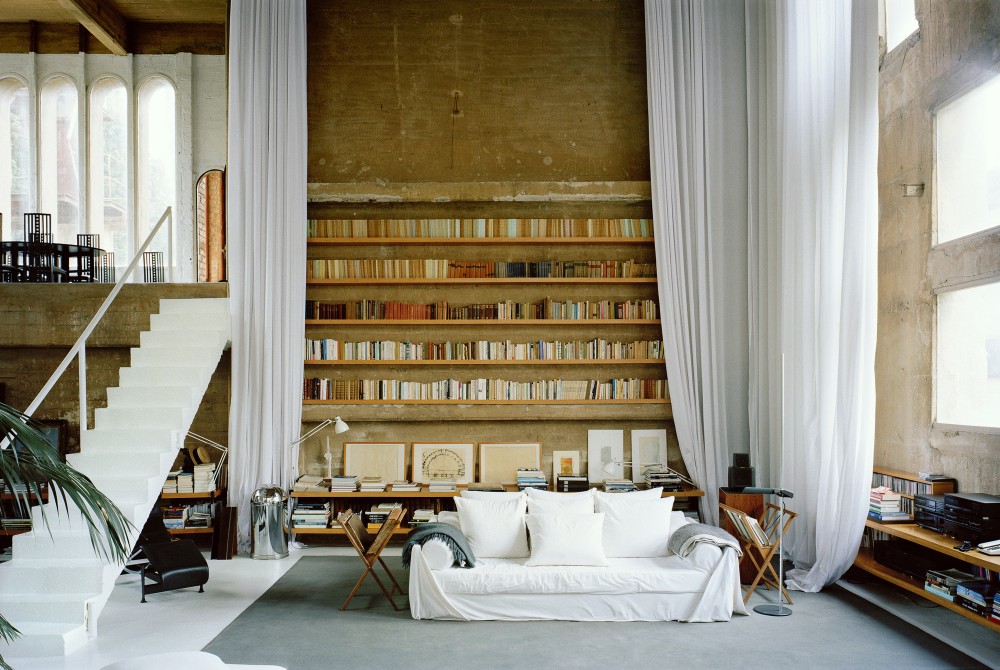 “I am a nomad, I am still a nomad, a traveller without port, required to establish reference points according to my journey. I was born in Barcelona, my father was catalan and my mother from Venice, I am at the crossroads of two cultures that clashed and melted throughout history.

In my early years I crossed the straights of Gibraltar, going south, and discovered in the valley of Draa villages built with cubes, piled up and constructed according to the families’ rhythm of growth, and despite that, strangely well-ordered, organic, profoundly architectural. All around, the desert; the fantastic shapes of dunes, constantly transformed by strong winds that appeared before me as essential elements, beyond anything that we can draw. The rose sands of the Teneré desert, outlined against the indigo sky, the endless spaces of rocks and stones, were my initiation to absolute beauty.

In the desert I met the nomads, the blue men of the Sahara, people that belong to an ancient civilization. I discovered that they understood the abstract concept of space better than anybody and we became best friends.

The factory is a magic place which strange atmosphere is difficult to be perceived by a profane eye. I like the life to be perfectly programmed here, ritualised, in total contrast with my turbulent nomad life.” 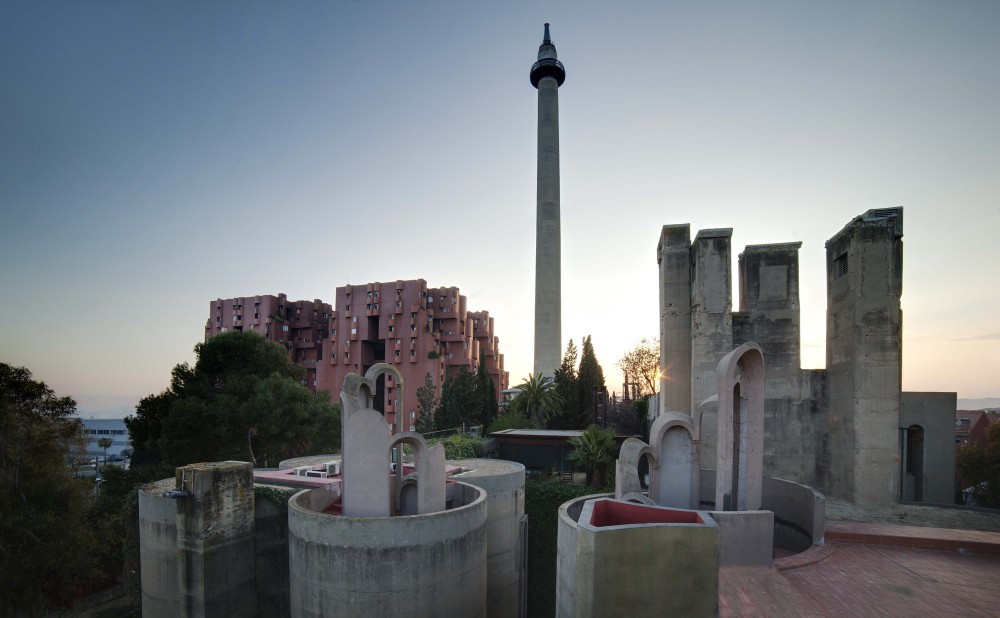 It’s “mah-kah-nee-oh-loo” [that’s a good breeze for sailing, in Hawaiian] and I’m Allison Makani`olu Rowe. Insatiably curious and perpetually amazed, I’m always on the hunt for the next adventure. My belly is full of delicious treats, my camera is overflowing with photos, and I haven’t stopped smiling yet.

I’m currently living in London, New York, or Tokyo as part of an awesome dual-degree masters program [Global Innovation Design, through the Royal College of Art and Imperial College in London]. No doubt there will be plenty of stories to share!